Education and the politics of multiculturalism in Asia

Academics at Kyushu University, La Trobe University and National Taiwan Normal University are collaborating in comparative research on the politics of identity in societies across the Asia-Pacific. Related projects include a co-edited education-focused topical section of the International Journal of Taiwan Studies, contributions to a major UNESCO review of global education systems (coordinated by UNESCO-MGIEP) and a study (by Edward Vickers of Kyushu University) of the official use, in the People’s Republic of China, of history in curricula and propaganda relating to societies on China’s periphery.

Education and the politics of identity in East Asia today NEW

*The Program is subject to change due to circumstances. 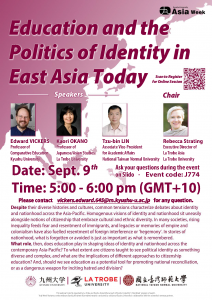 Despite their diverse histories and cultures, common tensions characterize debates about identity and nationhood across the Asia-Pacific. Homogenous visions of identity and nationhood sit uneasily alongside notions of citizenship that embrace cultural and ethnic diversity. In many societies, rising inequality feeds fear and resentment of immigrants, and legacies or memories of empire and colonialism have also fuelled resentment of foreign interference or ‘hegemony’. In stories of nationhood, what is forgotten or avoided is just as important as what is remembered.
What role, then, does education play in shaping ideas of identity and nationhood across the contemporary Asia-Pacific? To what extent are citizens taught to see political identity as something diverse and complex, and what are the implications of different approaches to citizenship education? And, should we see education as a potential tool for promoting national reconciliation, or as a dangerous weapon for inciting hatred and division?

Speakers on the panel

Edward Vickers
Professor of Comparative Education @Kyushu University, Japan
Edward Vickers is Professor of Comparative Education at Kyushu University, Japan, where he directs the university’s inter-disciplinary Taiwan Studies Program. He spent many years working in Hong Kong and Beijing, first as a schoolteacher and later as a textbook author and researcher. He has published widely on education and identity politics in Hong Kong, Taiwan and China, as well as the politics of heritage and public culture across East Asia. His recent works include the monograph Education and Society in Post-Mao China (2017), co-authored with Zeng Xiaodong, and (with Mark Frost and Daniel Schumacher) the volume, Remembering Asia’s World War Two
(2019). He is currently working on a project investigating the use of history in Chinese propaganda (e.g. school curricula and museums) relating to certain ‘minority’ regions in the far west (Tibet, Xinjiang and Inner Mongolia) and to ‘Han’ societies on China’s eastern periphery (Hong Kong and Taiwan). The shifting politics of identity in Chinese societies is thus a central focus of his current work.

Link to the ZOOM
https://latrobe.zoom.us/webinar/register/WN_JjvMCCZoSQayFlecIslGiA
Ask your questions during the event on Slido – www.slido.com
Event code: # J774

Q-Webinar of Collaborative Studies on SDGs in Asia